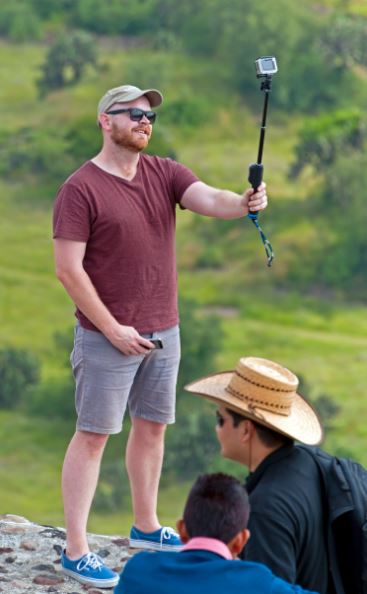 When a digital camera device, such as a smartphone, is positioned beyond the normal range of the arm, a selfie stick is utilized to snap photos or videos. Hiroshi Ueda and Wayne Fromm, who invented the selfie stick, made it so that they wouldn’t have to ask a stranger to take their picture. In this way, photographs can be taken at angles and distances that the human arm alone would not have been able to reach otherwise. The sticks are normally extendable, with a handle on one end and an adjustable clamp on the other end to secure the device in place.  Most people use them to take self-portraits using their cell phones, as the name implies. The thickest and strongest part of a selfie stick’s arm is located at the end that is not attached to the camera, so that it can be held aloft more securely.

Using this long pole, users will be able to get a better shot of themselves by increasing the depth and width of the frame. Selfie sticks, on the other hand, put people in danger when they try to take the ideal image.

According to a number of investigations, selfie sticks may pose a risk of injury. As a result, many US museums, such as the Museum of Modern Art in New York City and the Museum of Fine Arts in Boston, have outlawed them due to security concerns. This type of phone camera extension has also been outlawed by Disneyland, as well as the other Disney theme parks.

Injuries and deaths resulting from the use of selfie stick

The shocking reality is that India has the highest mortality toll from taking selfies anywhere in the globe! About 60 percent of the selfie-related deaths in the world have occurred in India in the past two years, according to research undertaken by Carnegie Mellon University in Pennsylvania and Delhi’s Indraprastha Institute of Information.

There have been numerous stories about people who have died while taking a selfie, including the drowning of an engineering student at Bandra Bandstand, the death of a boy posing in front of a speeding train in Chennai, the death of a group of friends who fell off a cliff in Goa, and the alarming death of a tourist in front of the Taj Mahal in Agra, among others.

In 2021 and 2022, the following are selfie stick-related injuries and deaths: No matter how popular it is among tourists and families, many public places have banned or restricted the use of selfie sticks due to concerns about safety and nuisance to others.

Selfie sticks have been prohibited from various concerts and music festivals in the United States, Australia, and the United Kingdom. The organizers have emphasized their role in the unlawful recording of bands’ acts, as well as the inconvenience and safety concerns for other audience members.

Due of potential harm to priceless artwork and other items, museums, galleries, and historical sites like Versailles have all banned the sticks for visitors’ usage.

A number of theme parks, including Disneyland, Walt Disney World, Tokyo Disney Resort, Disneyland Paris and Hong Kong Disneyland have outlawed selfie sticks. Six Flags and Universal Orlando have also enacted similar bans. Because of safety concerns, selfie sticks were previously not allowed on any of the rides at Disney World. However, after a number of incidents where a guest pulled out a selfie stick during a ride, such as on California Screamin’ and Big Thunder Mountain Railroad, Disney issued a park-wide ban on the accessory.

As a result of its “nuisance value,” selfie sticks have been banned from sporting events, as well as from disrupting other spectators’ enjoyment or view. It was decided that the devices would be banned because of “damage to cyclists, officials, and oneself” during the Australia Down Under Tour.

An unregistered selfie stick with a Bluetooth camera trigger was banned in South Korea by the radio management agency in 2014 because it was deemed a “telecommunications device” and had to be tested and registered with the agency. Selfie sticks were banned from the WWDC Developers Conference in 2015 for reasons that were never disclosed. Is the selfie obsession too much for you to bear? Pay attention to your surroundings when using a selfie stick as a general guideline. If you want to take a safe selfie, here are some tips:

Selfies aren’t going away any time soon, despite the deaths they’ve racked up. Self-portrait photography should steer clear of the following potentially dangerous situations:

You should never put your life at risk for a photograph. Put the selfie stick away when you’re in a potentially risky situation to keep yourself safe.