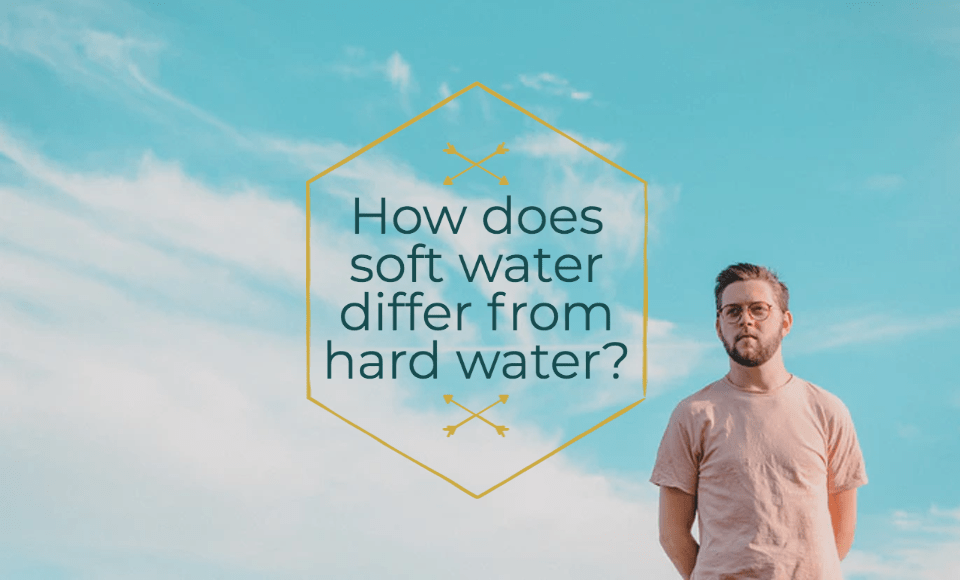 Soft water forms abundant lather with soap, but hard water does not. Hard water contains compounds of calcium or magnesium. Rainwater caught off a clean roof is soft, being almost entirely free from chemical impurities. But soft water found in clean roofs has in it some carbonic acid gas, which though does not make it hard, enables the water to dissolve calcium and magnesium easily. This process accounts for the hardness of water drawn from deep wells, which is rainwater that has penetrated the ground, dissolving chemicals on the way. Hard water can be softened to a certain extent by boiling, which deposits some of the dissolved matter on the inside of the vessel; and more thoroughly by treating with chemicals. To understand more about the difference between hard water and soft water, here is a detailed description of both types of water.

Hard water is the term used for dihydrogen oxide that has high mineral content, which basically means that hard water is not made up of just water. This type of water usually has calcium and magnesium. According to the World Health Organization, hard water does not pose any threat to human health, and it is considered safe to consume. In addition, some researchers stated that the calcium and magnesium found in hard water are good for those who are deficient in the said nutrients for the body.

However, there are a few studies conducted that have proven that there is a connection between drinking too much hard water and suffering from cardiovascular disease. There is still no conclusive evidence to point to the fact that drinking hard water may weaken the heart, and the World Health Organization still does not recommend hard water to be banned from consumption

On the other hand, it has been evident that hard water causes malfunctions whenever they go through pieces of machinery, such as cooling towers and boilers. For boilers, the minerals found in hard water causes the flow of heat inside the equipment to become impaired, thus reducing the efficiency of the boiler to heat water. The boiler will eventually overheat and may lead to failure.

Because of its cons, most people would often soften hard water to eliminate the mineral deposits found within its properties. Soap and detergents are the ones that are typically used to removes minerals in the hard water, but the process of removing the minerals can be tedious. Because of the arduous process of softening hard water, experts recommend that people should only perform the softening on the water that will be poured on boilers or cooling towers, and not on the ones that people are going to drink straight away. Despite being softened, the hard water will still not be called soft water; instead, it will be considered as “softened water.”

Some people may not know the difference between softened water and soft water, as they are often referred to as one type of water. However, it is important to know that these types are separate from each other in terms of their creation and their properties.

Doctors would recommend that people should drink hard water instead of soft water, as the former has magnesium and calcium that is needed by humans for metabolism. If a person would opt to drink soft water and not hard water, there is a chance that he or she may suffer from calcium or magnesium deficiency, but the chances are quite low given that we normally get these nutrients from other foods and drinks.

In the United States, it is reported that about 85% of the water found in its land is made up of hard water. Because of the abundance of hard water, water softening in most parts of the country is used more evidently than any other country in the world.