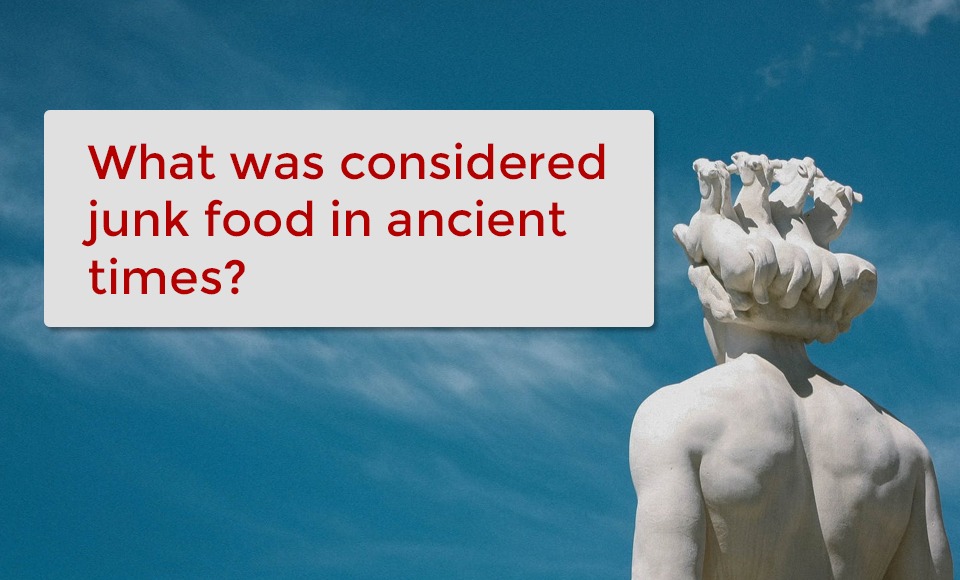 In terms of processing, junk food is really the result of our ability to process food down in the modern age to very calorie-dense ingredients, such as white flour, refined sugar, and different types of oils, then cheaply recombine them into calorie-dense food products that don’t contain any fiber while also having almost no water. What’s interesting about junk foods is because they are highly processed, most of the nutrients found on their ingredients are gone, and these nutrients are what makes us not only healthy but also feel full. In short, humans will be able to eat a lot of junk foods even without feeling fully satisfied, which is why these processed food products can sometimes be addictive.

Junk food in ancient times is pretty hard to find, mainly due to the reason that humans haven’t invented food processing during that period yet. In addition, people in ancient times would often eat ingredients typically found in junk foods on their own, like fruits and some vegetables. However, dishes have already existed back then, so there are probably meals that were eating for lunch and dinner that provide plenty of nutrients.

When we say “junk food,” we actually pertain to types of food that serve little to no nutritional value, hence the reason why they are called “junk.” In ancient times, all the different kinds of food that exists are considered important, and most of them are probably more nutritious than the food that we eat today because of the inorganic methods that we harvest ingredients.

On the other hand, you may consider that food eaten by those who were in the higher class in society as junk food, as they are eaten not for their nutrition, but because of their flavor or their ability to satisfy the palate. One of the “junk” foods that the high-class people, and most soldiers in the Roman Empire, ate was cheese. This fermented food is often rationed to soldiers along with bread and fruits, but the wealthy would usually eat cheese during leisure time. In terms of nutrition, cheese shouldn’t really be considered as “junk food,” but it is regarded as one during the time of the Roman Empire because of how they were eaten frequently as a snack. There have been multiple changes in the price of cheese during that period, but its price didn’t go down to the point that the poor were able to afford it.

Fruits were also the junk food for the rich people in the Roman Empire, as they would typically consume pears, pomegranates, apples, and grapes at almost any time of the day. These fruits would also be preserved during their off-season so that they can be eaten during winter. Besides fruits, honey is another “sweet” food that can only be afforded by the rich in that era. Honey can be called junk food because it contains no fat, protein, or even fiber within it, and it only acts as a sweetener for bland-tasting foods like bread. However, honey does contain calories and sugar, which are two nutrients that can be seen as unhealthy by some people in the modern age.

Another food that has similar a function to honey is garum, a fermented sauce applied as a condiment for dishes. To make garum, people would take out the guts of fishes and mixed them with the salt within brine. The ingredients would then ferment in the mixture, and after a few days, it would be good to use. Like honey, there are only a few nutrients found in garum, but it really adds flavor to any dish, which is why it was popular in ancient times. Although garum no longer exists in modern cuisine, it served as the inspiration behind other fermented sauces like Worcestershire sauce, the Asian fish sauce, and the original ketchup that was made using pickled fish as one of the ingredients.

All in all, there was really no junk food that exists in ancient times, but there are certain foods that we can consider as one, although they still have nutritional value. Luckily, most of these ancient “junk foods” are still available today, so if you want to have a healthier diet, you may want to replace your current junk foods with these ones.