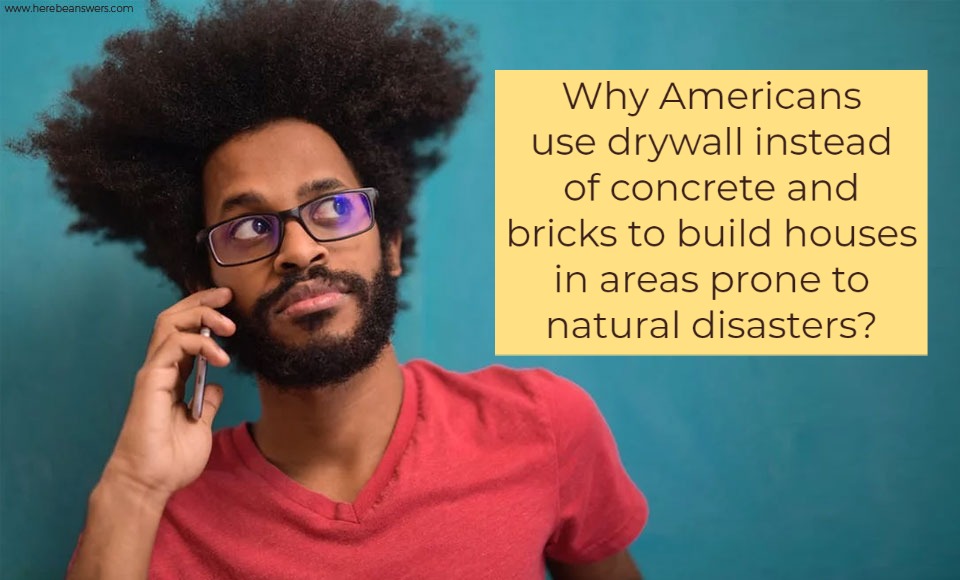 Fire is the only natural disaster that concrete and brick houses are better at dealing with. Tornadoes can easily dismantle bricks and concrete because of its powerful gusts of wind, and it could even worsen the damage due to the pieces of wood that are swirling around at the outer layers of the tornado and could hit the structure of the house. For some people who own old-style homes, they have built a tornado bunker that thick 4-foot walls and steel reinforcement. Unfortunately, most brick houses don’t have a tornado bunker, so the family may not be entirely safe inside their home once a tornado strikes.

Hurricanes tend to do the most damage to concrete homes, and it is mainly due to flooding. When concrete and bricks come into contact with water for a long period of time, mold will start to appear in the affected areas. When the water that went inside the house is carried or washed away, the bricks and concrete may go break and go with the water. For extremely powerful hurricanes, the homeowner will be dealing not only with the flood but also with the strong winds that are similar in power to a tornado.

For earthquakes, the concrete and brick homes take far worse damage than wood. These materials are too rigid unless expensive technology is utilized to make it more flexible without losing its durability. If they aren’t modified, they would often just crumble when an earthquake occurs since they cannot flex.

Another negative aspect of choosing bricks or concrete over drywall is that they are three to ten times more expensive than wooden materials. The chances of you actually losing your home in your lifetime are quite low, and you most likely get insurance to protect against it. However, it is far better for people to spend their hard-earned money to build a nicer home using more durable materials since they are actually cost-efficient because you won’t always have to pay for maintenance.

Drywall is not a structural weight-bearing material, as it used as interior finishing of the walls of the house. Wood is still the structural component, and it could sometimes be used as an alternative to fiberglass for outdoor wall slats.

The main benefit of drywall is that it is waterproof, which means that it won’t usually get damaged in flood, and it prevents mold buildup as well. Besides being waterproof, there could also be optional advantages that the drywall possesses, depending on its type.

Regular drywall is the most common type of drywall and also the cheapest one out of all. This material is known for its white color. Regular is both fire and water-resistant, although its capacity to handle these elements is weaker compared to the other types.

Green board drywall, often called moisture-resistant drywall, is more water-resistant than the regular, but it is 100% waterproof because its outer layers consist of thick sheets of paper. This type of drywall is used to finish building the walls for bathrooms and kitchens, which are the rooms that can have more moisture content than any other parts of the house. The green board drywall is also effective in lowering the humidity caused by the pipes for the sink, the toilet, and other appliances that are connected to the local water system.

The third type is the blue board drywall, which has similar functions to the green board variant, but this time, the drywall is coasted with veneer plaster to make it more durable. The one downside of its veneer coating is that it is not really made to be painted on, so you will be stuck with its signature blue color for your wall.

Purple board drywall is an “enhanced” version of the regular because it has stronger water-resistant and fire-resistant properties. However, since it is considered an upgrade to the regular drywall, it is typically more expensive, hence the reason why it is used for home sparingly. If the homeowner only has the budget to place purple board drywall in one or two rooms in the house, it would be in the bedrooms to reduce the heat and humidity that may sometimes make sleeping less comfortable.

Soundproof drywall is a special type that focuses on reducing the noise produce by sound system inside a room. In order for this drywall to do that feat, the manufacturers built it to have more layers of wood fibers and gypsum, which have noise-canceling capabilities. Unfortunately, because of the multiple layers of materials, soundproof drywall is much harder to cut than regular drywall.

One of the most advanced types of drywall is the fire-resistant drywall called Type X. Its fire-resisting properties stem from the special glass fibers that are mixed in the drywall’s compound to make it durable and non-combustible. Many building codes require builders to use Type X drywall for bigger buildings or structures like apartments, housing units, commercial spaces, and workplaces. According to studies, the Type X is able to resist fire for up to one hour, and this length of time is sufficient enough for people to leave the building before the fire completely takes over.

Recently, several manufacturers have created the stronger fire-resistant drywall called Type C, which is said to be able to withstand fire for up to four hours. This drywall type is made with more glass fibers compared to the Type X, and it also has vermiculite, a mineral that enables the drywall to have a stable temperature even during a severe fire in the building. There are currently only a few structures that have Type C built into them, and this is mostly due to the hefty price tag of the said drywall.

From looking at the benefits of using drywall instead of concrete and bricks to build the walls of houses, you will easily see why Americans have switched to the drywall in recent times. In a couple of years, we may be able to see that all of the houses and buildings in the world have drywall built onto them, and we are getting closer and closer to making it a reality since drywall is slowly becoming more affordable.